Make some sparks using a film canister and other household objects.

This tutorial was originally published on Forever Geek on April 7, 2005.

I wrote these plans after building building the project pictured at sparkbangbuzz.com. I drew all of the pictures (excluding the photograph) using MS Paint.

This is a guide on how to make a Leyden Jar that makes awesome blue sparks with materials mostly just lying around your house. It’s cheap, it’s basically harmless, and it’s fun! First, here’s a list of the materials you will need:

Now that you have all of the parts, let’s get to work. First, drill (or poke) a hole in the center of the lid of the film canister. The hole should be just wide enough to allow the screw to fit snugly inside it. Next, cut a rectangle of foil large enough to wrap around the outside of the canister, and about 2/3 of the height of the canister. Tape the foil to the canister, being sure to leave an “open section” for a loop of wire to go around the canister over the foil (you should just need to tape the foils' edges to the outside of the canister.) This is roughly what your canister should look like with the top on (sorry for the horrible MS Paint art.) 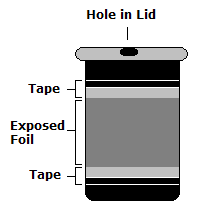 Now, it gets a little more complicated. Secure the multistrand wire to the top of the lid using the screw and a nut (see image below.) The multistrand wire should be about 1" or 2 cm long, and should have about 1/4" or .75 cm of insulation stripped off both ends. Make a hook on one end of the wire, and secure it in between a nut and the outside of the lid. Fan/spread out the conductors on the other end of the wire. Secure the solid wire to the bottom of the film canister in a similar fashion. Bend the wire as shown below, making it poke out wider than the canister lid. This way, the wire is guaranteed to touch the foil on the inside of the film canister when the lid is put on. Make a loop at the end of the wire so that it won’t tear through the foil on the inside of the canister and to make better a electrical contact. If this is confusing, look at the drawing below (again, sorry about MS Paint.) 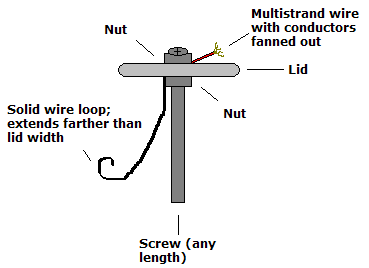 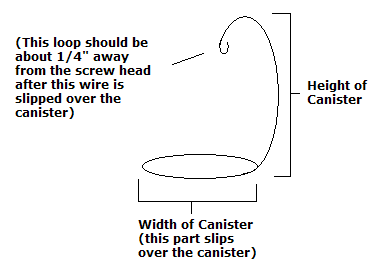 Last, bend another piece of wire into the shape above, and insert it over the bottom of the canister onto the ‘open section’ of foil, so that it looks similar to the finished Leyden Jar below. Make sure the top of the wire is at a MAXIMUM of 1/4 of an inch away from the screw head. After the wire is in the corect position, cover the outside of the canister with scotch or electrical tape so that you don’t shock yourself while handling it (the canister below is covered with scotch tape, although it’s kind of hard to see.) 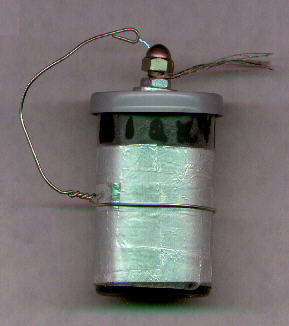 You’re done! You have just built something called a Leyden Jar–in effect, it’s a very simple capacitor. To use it, simply wave the canister over the surface of a CRT TV screen or monitor, or anything that makes static electricity (the multistrand wire ‘receives’ the static electricity and should therefore be closest to the static source.) Then gently push down the solid wire on the outside so it reaches a little closer to the screw head (without touching) and ZAP! There’s your spark. Most of the time, the Jar will discharge itself with no extra help. If you’re having trouble charging the Jar, you can use the last two materials on the material list to build a simple but excellent static generator. Take the fabric and rub it along the pipe all the way up, then all the way down. Have someone else hold the Leyden jar; pressing the multistrand pickup wires to the pipe, and discharge the Jar after a few seconds of rubbing.

Please note that the finished Leyden Jar holds high voltage, low current electricity, which is normally harmless. However, don’t take any chances! If you’re not sure if it’s charged or not and you think it’s not safe, simply press the press on the outside wire against the screw to completely discharge it. Keep your finger away from the screw head area as much as possible while it’s charged. You don’t want an ‘accident’ (you’ll just get a static shock. No one likes getting a static shock.)

I would like to give special thanks to Lenny R. of sparkbangbuzz.com for his ideas. As far as I know, the original “Film Can Leyden Jar” was his design.

That being said, happy spark making!

This work is licensed under a Creative Commons Attribution-NonCommercial-ShareAlike 3.0 Unported License.