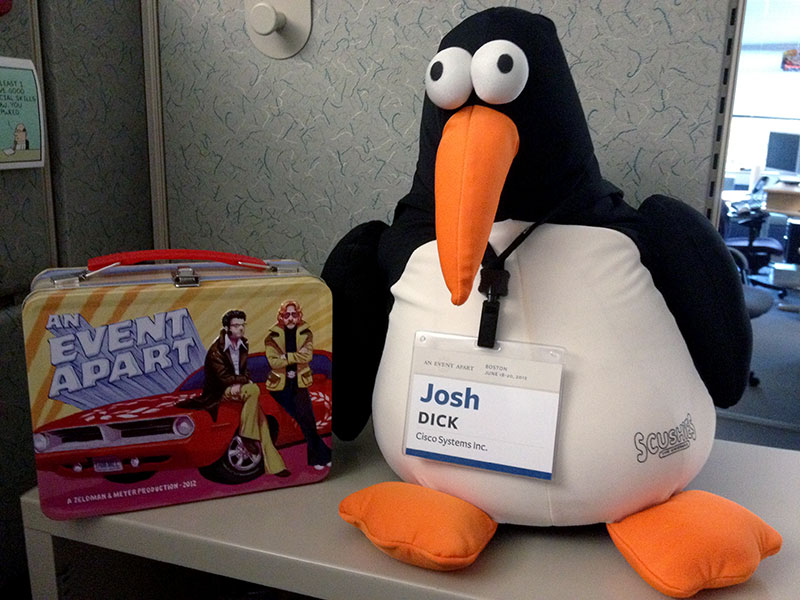 I was very fortunate to have the opportunity to attend An Event Apart Boston 2012 and hear talks from some of the biggest names in web design.

The conference happened during June 18th and 19th, which was before I started this blog. It is now exactly two months later, and I figured my notes from the conference would make for a long and scatterbrained but otherwise great blog post. Better late than never, right? Rather than just pare down or summarize my notes, I’ve decided to clean them up and post them here in their entirey. I didn’t want to omit any details!

My notes are organized by talk in the order that they happened at the conference. Attendees were live-tweeting each talk, and the conference organizers provided a Twitter aggregator called A Feed Apart. In each talk title below, I’ve linked to the appropriate A Feed Apart page, as well as each speaker’s web site and Twitter page.

Tweets from conference speakers and attendees are scattered throughout my notes, and for each tweet I’ve linked to the original source on Twitter in the leading @userame. The tweets I’ve included are either direct quotes from the speakers, or are memorable, interesting or humorous reactions from attendees that I think helped convey the overall mood at the conference.

Whitney Hess - What’s Your Problem? Putting Purpose Back into Your Projects (whitneyhess.com • @whitneyhess)

An Event Apart was the first conference I’ve ever attended and I wasn’t quite sure what to expect, but it went above and beyond the expectations I did have. It was extremely well organized and gave me a full inspirational recharge. In fact, attending the conference was one of the things that motivated me to start this blog. (I was told by other attendees that An Event Apart in particular sets the bar very high as far as conferences go; I hope it’s not all downhill from here!)

I’ll let you draw your own conclusions from my notes, but I feel that these were the biggest recurring themes across all of the talks, at least in terms of the state of the art in web design:

Anyone independently keeping up with industry best practices would have already known these points without needing to attend a web design conference–I certainly did. What made the conference valuable for me was the experience of watching industry experts speak so passionately about their craft(s), absorbing pearls of wisdom about specific design principles, and being surrounded by other like-minded attendees.

An Event Apart certainly lived up to its name. It was a fantastic, inspirational experience, and I hope I’ll be able to attend again in the future.